The hulking giant walked inside the Sanctum where Cybel ministered to his blades, ‘Solace’ and ‘Absolution’. Her pale delicate hands cleaned and oiled the monomolecular edges with the attention a mother would give to her newborn children. Her Master, the supreme commander of the ship and the leader of The Covenant was mighty sight to behold. Clad in the crimson Heresy pattern Power Armor with his right arm and shoulder-pad painted in midnight black he strode with purpose. Behind him, a pair of black wings adorned his jump pack in remembrance of his long lost father. Marks of his former legion adorned his left shoulder-pad while the accursed mark of the Messiah of Blood was forged in bronze on his right shoulder-pad. Cybel had the misfortune to serve the followers of the Messiah of Blood and they were indeed terrifying but He was different. His visage resembled that of His father’s image painted on the murals of the Sanctum, his long golden hair gently falling over his unblemished face, and eyes as green as the jade visor lenses in his helm. A more naive soul would see innocence, beneficence even, in their depths.

However, the images of the night when The Covenant fell upon her home world of Gnuava were blazing inside her mind like supernovae. The cull of the sorcerers of Balhandur, the planet’s capital, echoed throughout the Calderax sector. It was in the deep dungeons of Balhandur, while she was still a prisoner and a plaything for the depraved sorcerer overlords when she first laid eyes on Vildar. That night, his visage was bathed in the blood of the witches and warlocks, his golden hair soaked in crimson vitae and viscera. His fangs gleamed in the moonlight. She could barely keep her head upright, weeks of torture were taking their toll on her bound, fragile form.

The giant tore the bars from the cage without effort and studied the pale, naked form the woman inside. She was bound to the wall, fresh brands seared upon her skin. He was mildly surprised to find out that the woman-thing still drew breath. He cupped her chin in his right black gauntlet and raised her head so she could look him.in the eyes. Vildar saw the hate flaring in her glassy eyes and smiled.

‘Have you come to finally kill me, Astartes,’ Cybel whispered with hoarse voice, ruined by days of dehydration.

Vildar shook his head. ‘The Messiah does not appreciate the blood of the weak woman, and you are not worthy to die by my hand. I have come here to cleanse this misbegotten place of the taint of the psyker-witches, and in doing so I seem to have murdered your tormentors.’ Cybel’s lips curled into a hate-borne smile.

‘How noble, you Black Winged Butcher. Are you going to leave me here to die in the bowels of this tower of the damned,’ she asked. Vildar admired the courage born of hopelessness and despair this woman was displaying. Most men would quiver and lose control of their bodily functions in his presence. He smiled and let go of her chin. Her head fell and was held by the chained collar around her neck. He drew ‘Absolution’ from its scabbard and turned on its power field. The crimson blade gave off a slight red tinted glow giving the room eerie purple hues. In one swift motion he cut the chains holding Cybel. Her body fell in a heap with the sound of rattling chains.

‘You have a choice to make woman. You can be of use me in the hunt for the tainted, creatures like your tormentors, or die of thirst and hunger here.’ The woman straightened to her knees with strained effort and raised her head to look the giant in the eyes.

‘I, Cybel Yormungand pledge my life to you, Master,’ she said with such conviction by which she herself was surprised. Vildar’s smile grew wider and he licked his lips clean from the flecks of blood.
‘I accept your pledge, Cybel Yormungand, Sanguinius and Khorne witness it,’ Vildar proclaimed and proceeded to carve the mark of the Messiah on Cybel’s right cheek with the tip of ‘Absolution’.

Her fingers traced across the scar and smiled at Him.

‘They are ready, my Master. They hunger,’ she whispered softly, reverently placing the blades upon their racks. Vildar bared his fangs and licked his lips in anticipation for the upcoming slaughter. He leered as he raised his blades and pointed them at the twin statues of Sanguinius and the Messiah in the middle of the Sanctum.

‘The cleansing time is nigh!’ he exclaimed, ‘death to the liar, the psyker and the Corpse-God! Let the litanies of righteous vengeance be heard as well as the dying screams of the heretics following the great Betrayer, the one who sacrificed my Father for his own twisted sense of righteous indignation! FOR SANGUINIUS, FOR KHORNE! BLOOD AND DEATH! DEATH TO THE FALSE EMPEROR!’

That night, “The Covenant of Angels” fall fell  upon the shrine world of Selenika. When the hour hit midnight, Vildar’s drop pod landed on the square in front of the Great Cathedral of the God-Emperor. ‘Solace’ and ‘Absolution’ shone in the night as the slaughter began in earnest.

Photo by Skitterphoto from Pexels 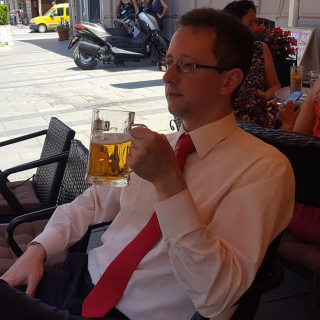